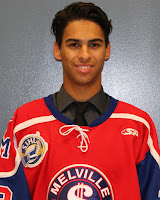 The Melville Millionaires started off 2016 on a winning note as they snapped their 7 game losing streak defeating the Yorkton Terriers 4-1 on New Years Day at the Farrell Agencies Arena.

After a scoreless 1st period, the Mils were able to break through 8:41 into the 2nd period as Tyler Kreklewich (pictured above) would finish off a nice passing play and go top shelf on Matt Kustra for his 10th of the season to give the visitors an early 1-0 lead. They would add to their lead in the final minute of the period as it would be a big scramble in front of the Terrier net and Keegan Milligan would pick up the garbage and shove it into the empty net for his 5th to give Melville a 2-0 lead after 40 minutes. Shots 27-14 Moneymen after 2.

Clarke Flegel got his 1st SJHL win for the Mils stopping 25 of 26 shots while Matt Kustra made 35 saves in the loss.

These two teams will go right back at it on Saturday night at 7:30 from the Horizon Credit Union Center.