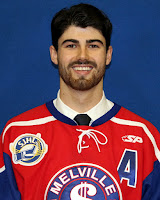 The SJHL's hottest team right now is the Melville Millionaires.

The Mils won their 4th straight game on Sunday, 5-1 over the Kindersley Klippers which also helped them climb out of the basement of the SJHL standings.

Brandon Wells stopped 22 shots for his 10th victory of the season in goal.

The Mils with the win are now 1 point ahead of the Humboldt Broncos, and 2 points behind their Highway 10 rivals the Yorkton Terriers for the final playoff spot in the SJHL.

The Mils will have a home/home series this weekend starting Friday hosting former Millionaire Tyson Predinchuk and the Estevan Bruins.

The Wayway Wolverines had a 2-1 lead after 2, but the Steinbach Pistons scored 3 third period goals to double up the Wolverines 4-2 on Sunday.

Alex Keena and Tyler Ham scored for Wayway who got 34 saves from Troy Martyniuk in the losing cause.

The Wolverines' next action will be on GX94 on Thursday night when they entertain the Dauphin Kings from the Wayway Arena Complex. Pregame show will be at 7:20, pxp at 7:30 with Yorkton Dodge Junior Hockey.
Posted by Benny W at 05:42