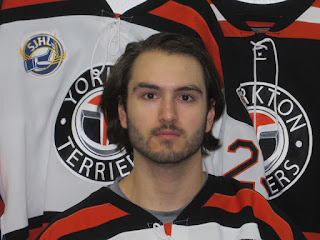 The Yorkton Terriers got their 2nd big win on the weekend as they doubled up the visiting Humboldt Broncos 8-4 last night at the Farrell Agencies Arena.

LJ Naccarato (1G 2A) [pictured above] & McKenzie Welke (2G 1A) led the way with 3 points each while Cole Keenleyside (2G), Brandon Sookro, Jordan Ross, and Devin Gerwing also scored for the Terriers.

The Terriers next action will be on Tuesday night when they host the Estevan Bruins.

Meanwhile after winning 4 straight, the Melville Millionaires have lost their last 2, losing on the road 3-1 to the Estevan Bruins.

Keegan Milligan had the lone goal for the Mils while Brandon Wells made 38 saves in the losing cause.

The Mils next action will be on the road this Tuesday and Wednesday when they visit the Nipawin Hawks and Melfort Mustangs respectively. Both games you can hear on GX94 with Yorkton Dodge Junior Hockey, pregame show 7:20 pxp at 7:30.


Meanwhile in the MJHL,

The Wayway Wolverines gave up 3 2nd period goals and that proved to be too much as the Winkler Flyers slipped by the Wolverines 5-3.

Alex Keena, Ty Enns and Rhett Lough had the goals of the Wolverines. Greg Harney made 23 saves in the Wolverine goal & took the loss.

The Wolverines and Flyers will meet again tonight (Sun) at 7:30 from the Wayway Arena Complex.
Posted by Benny W at 09:47