The Youth Movement continues in Melville 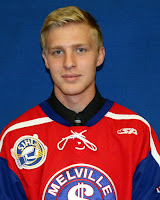 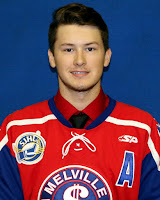 The Melville Millionaires continued their youth movement the last couple of days by dealing away 3 of their 20 year olds.

Bear, who hails from Ochapowace spent parts of a couple seasons with the Millionaires where he compiled 6 goals, 15 assists in 59 games in Melville. So far this season, Bear had 4 goals, 7 assists in 32 games. Bear also spent time in the WHL with the Red Deer Rebels and Prince George Cougars.

For Hansen who came to the Mils in this his 20 year old season after playing around 270 games in the WHL with Moose Jaw and Regina. This season with Melville playing both forward and defense had 2 goals, 11 assists in 26 SJHL games. 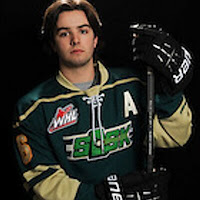 In Reeve (pictured above), the Mils get a young 17 year old defensemen who hails from Saskatoon had 2 goals, 1 assists for 3 points in 19 games for the Mustangs this season. Before that, he played 2 years with the Saskatchewan Midget AAA Hockey League's Saskatoon Blazers.

Then today (Thurs) the Mils complete a deal with the Estevan Bruins by sending 20 year old forward Tyson Predinchuk to the 2016 Western Canada Cup hosts in exchange for the rights to 17 year old F Turner Ripplinger and future considerations.

Predinichuk, a Regina SK product played 110 career games with the Mils compiling 45 goals 44 assists for 89 points. This year currently he had 13 goals, 15 assists for 28 points in 35 games.

In Ripplinger, the Mils get a very good prospect who sits currently in a tie for 4th in Sask. Midget AAA league scoring with 18 goals, 16 assists for 34 points in 27 games with defending league champion Regina Pat Canadians.


The Mils also announced that they have added D Brandon Griffiths from the Battlefords Stars (SMAAAHL).