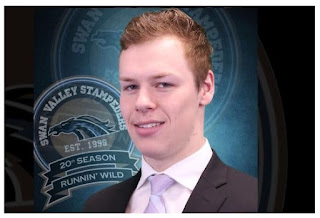 The Swan Valley Stampeders have evened up their MJHL Final at 1 game apiece after a 6-5 overtime victory over the Portage Terriers on Sunday night.

The Stamps got off to a quick start in the first as they would grab the early lead as Brian Harris would tap-in his 2nd of the playoffs on the PP to make it 1-0. They would add to their lead with a couple late goals as first up with 2:14 to go, Josh Tripp would take a beauty feed from Kasyn Kruse from below the goal line and the MJHL MVP would make no mistake for his 10th of postseason to make it 2-0. Then just 19 seconds later, it would be John Jebamani getting on the scoresheet for the first time with a rocket that would beat Ethan Peterson to give his team a 3 goal lead after 1 period.

The visitors would come out in the middle frame with a big period as first off Joey Moffatt would deflect in his 5th of the playoffs to get Portage on the board to make it 3-1. Then just under 3 minutes later, it would Orca Wiesblatt sniping in his 2nd of the playoffs to make it a one goal game. But the Stamps would respond to make it a two goal game once again as a nice drive play from Alex Uryga and his wrap around would get past Ethan Peterson for his 4th of the playoffs to make it 4-2. But late in the 2nd period, the Terriers would get a late powerplay and they would capitalize as a one-time from Chase Brakel would beat Merek Pipes top-shelf over the left shoulder for make it 4-3 Stamps after 40 minutes.

In the 3rd, the Stamps would even it up as Chase Brakel would add his 2nd of the night to even it up at 4-4. Then just 5:37 later, the Terriers would grab their first lead as a big rebound would be jumped on by Ty Barnstable who made it 5-4. It would stay like that until the the 13:38 mark of the third as Brad Goethals (pictured above) would hammer home his 8th to make it 5-5 to force overtime.

In the extra period, Goethals would add his 2nd of the night just 1:31 in as his long point shot would beat a screened Peterson over the right shoulder to give the Stamps the win.

The two teams will now meet in Game 3 of their Best of 7 series on Wednesday night in Portage La Prairie. GX94 will broadcast the game with Yorkton Dodge Junior Hockey, pregame show begins at 7:20 with Play by Play kicking off at 7:30 from Stride Place.