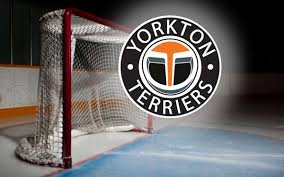 The Yorkton Terriers had their 2018/19 season come to an end on Wednesday night after falling 3-0 to the Battlefords North Stars in Game 4 of their SJHL Semi-Final series.

The North Stars for the 2nd straight night would get the opening goal as scramble in front of the Terriers net and the puck would scoot out for Quin Loon-Stewardson who make no mistake potting home his 6th of the playoffs to give the Battlefords at 1-0 lead after 20 minutes.

After a scoreless 2nd period, the North Stars would add some insurance late to put the game out of reach off with goals from Brett Gammer and Ryan Gil to lead them to the sweep.

Joel Grzybowski earned his 3rd straight shutout in goal for the Stars making 31 saves for his 4th shutout of the postseason while Terriers' goalie Ryan Ouellette turned aside 32 of 35 shots in the loss.

With the Terriers' season coming to an end, it was also the end of the Junior career for 9 graduating Terriers in Brendan Mark, Jared Legien, Andrew Henderson, Colby Brandt, Cole Keenleyside, Quin Hobbs, Dino Antoniadis. Mason Mullaney and Branden Klatt. Congrats to those individuals on their Jr. careers and I wish them nothing but the best going forward

In the other SJHL Semi-Final,

TJ Irey and Cody Davis scored twice to lead the Estevan Bruins to a 4-2 win over the visiting Melfort Mustangs.

The series is now tied at 2-2 with Game 5 taking place back in Melfort on Friday.