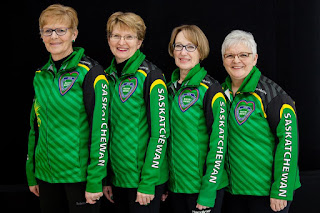 It was a golden weekend for Delores Syrota and her rink out of Wadena at the 2019 Canadian Masters Curling Championship in Saskatoon.

Syrota and her Saskatchewan rink of Bev Krasowski, June Campbell and Sylvia Broad score three points in the 8th and final end to defeat British Columbia 8-7 in the Gold Medal game.

On the Men's side, Team Saskatchewan skipped by Brad Heidt capture the Bronze medal after a 9-3 victory over British Columbia.