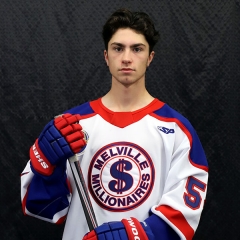 The Melville Millionaires earned win number 5 on the season on Wednesday night beating the Melfort Mustangs 3-2 in the shootout at the Northern Lights Palace.

The Millionaires came out with a solid first period and would be rewarded for their efforts as Zach Cain worked his way into the Mustangs' zone and his shot brought out a big rebound where Noah Wills (pictured above)  capitalized on it with his 4th of the season to make it 1-0 Melville after 1 period.

The home-side got the equalizer just 5:43 into the 2nd as off a offensive zone draw, Marco Lopez grabbed it and snapped it over the right-pad of Jared Thompson for his 8th to make it 1-1.

Melfort grabbed their first lead of the night late in the 2nd with just 88 seconds to go as Trenton Curtis caught the Mills on a sloppy change and went in alone and beat Thompson to make it 2-1 after 40 minutes.

Nicolas Samson tied things up for the Mills, 4:43 into the 3rd as he walked in and went top-shelf on James Venne to pull his team back even after regulation.

After a scoreless overtime, Noah Wills' scored the only goal of the shootout while Jared Thompson stopped all three Mustang shooters.

Speaking of Thompson, he made 31 saves on 33 shots to earn his 3rd win of the season, while Mustangs' G James Venne turned aside 32 shots in the shootout loss.

The Millionaires will return to action on Friday night when they host the Nipawin Hawks at 7:00PM from the Horizon Credit Union Center.