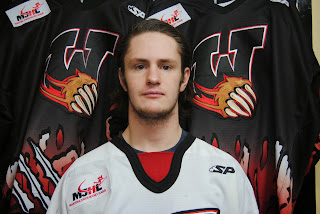 The Wayway Wolverines continued their winning ways on Tuesday night as they won their 3rd consecutive game 4-1 home ice win over the Virden Oil Capitals.

After a pretty back and forth start to the 1st period, the Oil Caps would take control at the mid point but they wouldn't be able to capitalize on their chances and it would be the Wolverines getting the lone goal of the opening frame as Rhett Lough would deflect home his 2nd goal of the season on the PP to give them a 1-0 lead after 1 period.

The Wolverines would add another goal on the man advantage in the 2nd, as Johl Swedlo would redirect a Connar Bass point shot through the legs of Oil Caps' goalie Cameron Pateman for his 14th of the year to increase Wolverines lead to 2-0 through 40 minutes of play.

The score would remain 2-0 until the 7:26 mark of the 3rd period when Soren Frederiksen would sneak one through the five-hole of Brandon Holtby for his team leading 30th of the season to make it a 2-1 game. But just a short time later, Robert Briem would take that momentum right back for the Wolverines as he snuck behind the Oil Caps after a nice feed from Montana Tanner, and hammer home his 21st, to once again make it a 2 goal Wolverine lead at 3-1. Wayway leading scorer George Spilchal would add an empty netter late, to finish things off and help the Wolverines cruise to their 23rd win of the season a 4-1 victory over Virden.

Brandon Holtby (pictured above) made 33 saves for his 2nd win of the season while fellow Regina product Cam Pateman turned aside 16 of 19 shots in a losing cause.

With the Dauphin Kings beating OCN tonight, the Wolverines are still 2 games back of the Kings for 8th place in the MJHL standings.

Wolverines next action will be on Thursday night when they host the league leading Portage Terriers at 7:30 from the Wayway Arena Complex.