Stamps; Wolverines both win on a Terrific Tuesday in MJHL 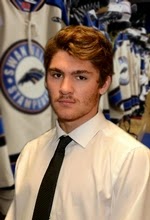 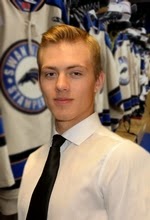 The Swan Valley Stampeders move 4 points ahead of the Selkirk Steelers for 6th place in the MJHL standings after they hammered the OCN Blizzard 6-1 on Tuesday night from the Centennial Arena in Swan River.

After a scoreless but entertaining first period, the Stamps would be finally be able to convert on their 6th ranked PP as Carter Johnson (pictured above right) would be at the right spot at the right time as he would get his 14th goal of the season and only his 2nd since early December to give Swan Valley a 1-0 after 40 minutes.

The Stampeders would explode in the 3rd, as first Tristan Langan (pictured above left) would finish off a nice pass from Carter Johnson and pot home his 9th goal of the season to give the Stamps a 2-0 lead. Tristan Mullin would be next up as he tapped home his team leading 21st goal of the season to make it a 3 goal lead. The Stamps would add 3 more in the 3rd, as Langan and Johnson would both add their 2nd goals of the night while the other marker would come from BJ Avery, his 18th to make it a commanding 6-0 Stampeder lead. The Blizzard would break the shutout bid for Lasse Petersen as Devin Muir would deflect home his 18th of the season to make the final, 6-1 Swan Valley for their 25th win of the season.

Petersen would end off the night getting his 5th win in between the pipes with 31 saves on the night, while on the other side Blizzard netminder would allow 6 goals on 32 shots in his 1st MJHL start before he was yanked after the 6th goal for Brody Cleays would stopped all 5 shots he faced.

The Stamps now sit 4 points ahead of the Selkirk Steelers for 6th place in the standings , Steelers do have a game in hand. Of course, 6th place would avoid the survivor series.

Swan Valley's next action will be on Friday night when they start a 3 games in 3 nights road trip in Winkler against the Flyers before they visit Steinbach on Saturday & Winnipeg on Sunday.

The Wayway Wolverines got the game winning goal from Robert Briem with 10:06 to go in regulation as they got a huge win, 2-1 over the Dauphin Kings.

Landyn Cochrane had the other goal for Wayway who got a 27 save performance from 20 year old Mitch Wiebe in the victory.

Wayway/Dauphin now in a tie for 8th place in the MJHL standings, at 46 points and their next action will be on Saturday night when they visit the OCN Blizzard.
Posted by Benny W at 21:09