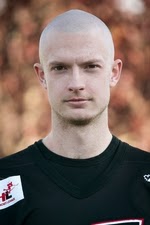 The Wayway Wolverines moved into sole possession of 8th place in the MJHL standings as they doubled up the Swan Valley Stampeders 2-1 on Wednesday night from the Wayway arena Complex.

It was a pretty fast paced start to the opening period for both clubs as early Wolverines captain Alex Keena would ring one off the iron early on, and then shortly after Stamps forward BJ Avery would get a breakaway but he would put it high and wide. The only offence of the opening period would come with just 5 seconds left as George Spilchal would sneak it five-hole on Graham Hunt for his 19th goal of the season to give the Wolverines a 1-0 lead after 1 period.

The tide would shift in the direction of the Stamps in the 2nd period as they would have all kinds of chances to even things up and they finally would on the PP at the 14:26 mark as Nick Kobelka would take a nice feed back door for his 16th goal of the year to even things up at 1-1. But that would last only for a short time as just 2:24 later, Lanigan SK product Morgan Greve would jump on a loose puck in front and slam home his 2nd of the season to give the Wolverines a 2-1 lead. That lead would last for the remaining of the 2nd period and through a scoreless 3rd frame as well to lead Wayway to their 20th victory of the season a 2-1 win over Swan Valley.

Wolverines goaltender Mitch Wiebe (pictured above) was the best player on the ice on both sides as he stopped 32 shots for the win, while Graham Hunt made 21 saves in a losing cause.

The Wolverines will go right back at it on Thursday when they visit the Virden Oil Capitals. GX94 will broadcast the game with Yorkton Dodge Junior Hockey, pregame 7:20 pxp at 7:30 from Tundra Oil & Gas Place in Virden. Stamps will host the Winkler Flyers on Friday night.

The Melville Millionaires got a 1G 3A from Reed Murray as they snapped the Humboldt's 6 game winning streak with a 4-2 victory over the Broncos on Wednesday night.

Lane Harbor scored his 19th and 20th goals of the season while Tyson Predinchuk had the other one for the Mils. Trevor Martin made 31 saves in the win.

Mils now have a 5 point lead on the Estevan Bruins for top spot in the Viterra division standing and their next action will be on Friday when they visit the Yorkton Terriers. GX94 will broadcast the game with Yorkton Dodge Junior Hockey, pregame 7:20 pxp at 7:30 from the FAA.
Posted by Benny W at 22:15