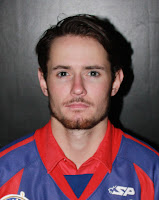 The Melville Millionaires have made a trade with the MJHL's Portage Terriers.

Zimmer, a Russell MB product only played in 2 games with Millionaires before requesting a trade.

Meanwhile, McKitrick who hails from Coral Harbour, Nunavut had 4 goals, 8 assists for 12 points in 10 games with the Terriers this season.

He helped the Cougars capture the 2017 RBC Cup on home ice this past May.