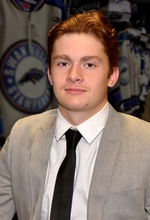 The Swan Valley Stampeders came back from 3-1 down to get their first win of the 2017/18 season, a 4-3 shootout win over the Wayway Wolverines on Sunday night.

The Wolverines struck first on home ice, just 5:19 in as Riley Vautour would capitalize on a Stamp turnover and go top shelf on Brett Evans for his 1st of the season to make it 1-0. But less than 2 minutes later, Swan would reply as captain Keaton Jameson would take a nice feed in front from Connor Navrot and bury his 1st of the year to even it up at 1-1 after 1 period. Shots 10-5 Swan Valley.

The home side would regain their lead just 39 seconds into the middle frame as on a 5 on 3 PP as Mack McPhee took a nice feed back-door and hammered home his 1st to make it 2-1 Wayway. They would add to their lead late in the frame as Stonewall product James Maxwell would go in on a partial break and beat Brett Evans short-side for his 3rd of the season to make it 3-1 Wolverines after 40 minutes. Shots were 12-10 Swan in the 2nd and they led 22-15 overall.

The Stamps would make it a one goal game just 3:42 into the 3rd period as Swan River's own  Lane Kirk would grab a loose puck and snap it home past Ethan Peterson for his 1st MJHL marker to make it 3-2 Wayway. It would stay like that until 2:04 to go as Connor Navrot's (pictured above) point shot would sneak through the Wolverine goaltender for his 1st of the year to send the game to extra time.

After a scoreless overtime which saw both teams getting the chance on the powerplay, it would head to the shootout where it would take 7 rounds with Noah Basarab getting the lone goal to make the Stamps victorious.

Brett Evans made 20 saves on 23 shots and all 7 shooters in the shootout to get his 1st win while Ethan Peterson was very good in the Wayway net making 37 saves.

The Melville Millionaires came back from 2 goals down to defeat the La Ronge Ice Wolves 3-2 in the shootout on Sunday afternoon.

The Ice Wolves got out to a 2-0 lead on goals by Austin Bill and Jason Bednarski but then Clayton Eisler and Trevor Paradise just 3:42 apart in the 3rd to tie things up at 2-2 to send it to overtime.

After a scoreless overtime, Cory Schillo would get the only goal in the shootout and Colby Entz who stopped 32 of 34 shots during the game would then stopped all 3 shooters he faced in the shootout.
Posted by Benny W at 19:08