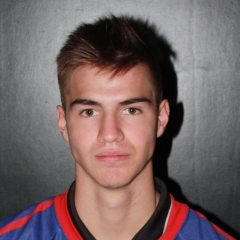 The Melville Millionaires captured the first instalment of the Highway 10 battle and won their 2nd straight in the process defeating the Yorkton Terriers 5-1 on Friday night.

After a scoreless first half of the opening frame, the Mils would strike 12:16 in as Daniel Liberty (pictured above) would finish off a nice passing play from Dayton Heino and go top shelf on Logan Bateman for his 1st SJHL marker to give the home-side a 1 goal lead. The Terriers would respond though just 2:01 later, as Dexter Robinson would a long beauty feed from rookie defenseman Charlie Risk behind the Mils D and he would finish it over the left pad of Colby Entz for his 1st of the season to tie it up at 1-1 after 20 minutes. Shots 13-10 Melville.

The Mils would regain their 1 goal lead just over 2 minutes into the middle frame, Eric Welford would take a nice feed in front and snipe home his 1st SJHL goal to make it 2-1. The Mils would add another in the late stages off the 2nd as Ethan Cooney would step across the Terrier blue-line and snap home the 1st SJHL of his own to make it a 3-1 lead for Melville after 40 minutes.

Melville would add a couple more in the 3rd off the sticks of Trevor Paradise and a power play goal by Damian Bentz to give the Mils the 4 goal victory.

Colby Entz earned his 3rd win of the season making 29 saves on 30 shots in the Mils net while 19 year old Logan Bateman made 27 saves in the losing cause.

The two teams will go right back at it on Saturday night when the two teams meet at 7:30 from the Farrell Agencies Arena in Yorkton.

Nipawin over Humboldt 7-5, Flin Flon slipped by Kindersley 5-1 and the Melfort Mustangs suffered their first loss losing 3-2 to the Estevan Bruins.

The Swan Valley Stampeders won their 3rd straight game defeating the Neepawa Natives 1-0 at the Centennial Arena on Friday night.

Jaden Townsend had the OT winner for Swan while Brett Evans turned aside 25 shots for his 1st shutout of the season.

Evan Robert was also solid in the Neepawa net making 44 saves on 45 shots.

The Stamps go right back at it on Saturday when they host the Winnipeg Blues.


Other games in the MJHL,