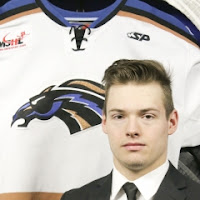 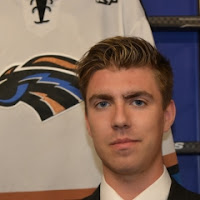 The Swan Valley Stampeders won their 2nd straight on Monday hammering the Wayway Wolverines 7-0 on the road.

After a back and forth start to the Stamps would strike with 4:14 left in the 1st period as Josh Tripp would bang home his 23rd of the season to give the visitors a 1-0 lead. Then just 1:14 later, Swan would strike on the power play as Trevar Mann would finish off a tic-tac-toe passing play from Connor Navrot for his 22nd that gave his team a 2-0 lead after 1 period.

In the 2nd, the Stampeders would add to their lead with 3 goals in the middle frame. Noah Basarab (17th), Jaden Townsend (12th) and Keaton Jameson (19th) would provide the offense to give the Stamps a 5 goal lead after 40 minutes.

In the 3rd it was more of the same as 2:16 in, Basarab would add his 2nd of the night to make it 6-0. Shane Roulette's short-handed marker and 18th goal of the season would wrap up the scoring at the 12:50 mark of the third.

Former Wolverines Ethan Peterson made 23 saves in the Stamps' net to earn his 1st MJHL shutout while Issac Labelle statrted for Wayway but he was pulled after allowing 5 goals on 23 shots. Curtis Stewart made 25 saves on 28 shots in relief.

The Stampeders moved 5 points up on the Neepawa for the 8th and final MJHL playoff spot after Neepawa couldn't hold on to a late lead and fell 6-5 on the road to the Portage Terriers.

Swan also now moves just 2 points back of Winnipeg and Selkirk who sit in a tie for 6th place overall and their next game will be on Friday night when they begin a 3 game road trip visiting the Steinbach Pistons.

The Wayway Wolverines will also be back on the ice Friday night hosting the OCN Blizzard at 7:30.

Other results on Monday had the Steinbach Pistons hold on for a 4-3 win over Winkler.

In the SJHL on Family Day Monday,

The Yorkton Terriers were mathematically eliminated from playoff contention after a 4-1 loss on home ice to the La Ronge Ice Wolves.

Nolan Dawson, Justin Bill, Antonio Di Paolo and Tanner Brewster scored for the Ice Wolves while Quin Hobbs had the lone goal shorthanded for the Terriers.

With the Terriers loss, that clinched a playoff spot for the Melville Millionaires.

The Mils will host those Ice Wolves on Tuesday night from the Horizon Credit Union Center. GX94 will broadcast the game with Yorkton Dodge Junior hockey, pregame 7:20 pxp will be at 7:30.

Yorkton will be back on the ice this weekend as they play a couple games in Kindersley against the Klippers starting on Friday night at the West Central Events Center.

Other SJHL scores from Monday,