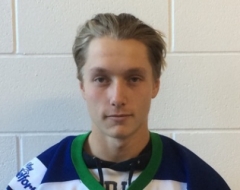 The Yorkton Terriers earned their 13th victory of the season on Tuesday night as they beat the visiting Flin Flon Bombers 3-2 in the shootout at the FAA.

The Bombers would strike first in this final meeting between both hockey clubs as Tyler Nyman would capitalize on a Terriers poor clearing attempt and beat Terrier goalie Joe Marcouiller over the left shoulder for his 4th of the season to give the visitors a 1-0 lead. The home team would reply just over 3 minutes later, as Cole Keenleyside would continue his torrid month of February and intercept a cross-ice D to D pass and would make no mistake for the short-handed goal, hist 17th of the year to tie it up at 1-1 after 20 minutes.

Yorkton would grab their first one goal lead with 4;58 to go in the middle frame as Josh Dobberthein (pictured above) would whack home his 4th of the season on the power play to give Yorkton a 2-1 lead after 40 minutes.

The Terriers would hold that one goal until late in the 3rd as Brandson Hein would bang home a rebound on the power play with just under 2 minutes remaining to secure the Bombers' at least a point.

After a scoreless overtime, in the shootout Josh Dobberthien would sneak one through Brendan Newton to get the only of the shootout while Terriers goaltender Joe Marcouiller stopped all 3 Flin Flon shooters.

Marcouiller, the 20 year old from New Brighton, Minnesota made 35 saves to get the victory while Bombers' G Brendan Newton made 26 saves in the shootout loss.

The Terriers' next game will be on Friday night when they visit the Melville Millionaires. GX94 will broadcast the game with Yorkton Dodge Junior Hockey, pregame 7:20 pxp at 7:30 from the Horizon Credit Union Center.

The Bombers, who now lead the Mils by 3 point for 9th place in the SJHL standings, will be in the Rail City on Wednesday for a showdown with the Melville Millionaires.

The Estevan Bruins clinched their 2nd straight Viterra division after a 5-1 win over Notre Dame.

Meanwhile in Nipawin, the Hawks beat the Kindersley Klippers 4-1 to capture the Sherwood division title.

In the MJHL on Tuesday,