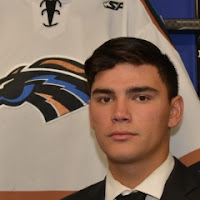 The Swan Valley Stampeders pulled into tie for the 8th and final playoff spot in the MJHL standings after 3-1 victory last night (Wed) over the Neepawa Natives in Dauphin.

The game was played at Credit Union Place in Dauphin due to the water situation in Swan River.

Shane Roulette (pictured above) led the way offensively for the Stamps with 2 third period goals while Quinton Sudom had the other.

Ethan Peterson made 22 saves to get the victory in the Stamps crease.

Stamps and Neepawa now both sit with matching 43 points but Swan has 3 games in hand.

Swan Valley's next game is slated to be on Friday night when they host the Winkler Flyers.

The Melville Millionaires' 2 game win streak was snapped after they dropped a 3-1 decision on Wednesday in Melfort against the Mustangs.

Tyler Millar got the Mils on the board first but then the Mustangs scored 3 unanswered goals by Colin Schmidt, Loch Morrison and Rock Ruschkowski to lead them to their 30th victory of the season.

Mustangs G Hunter Arps stopped 25 shots to get the victory while Mils netminder Colby Entz turned aside 30 shots in the losing cause.

The Mils will continue their 4 game road trip this weekend with a road-trip through Kindersley (Friday) and the Battlefords on Saturday.


Other game in the SJHL on Wednesday,