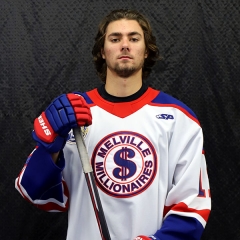 The Melville Millionaires snapped their 6 game losing streak on Friday after a 6-4 win over the visiting Yorkton Terriers.

It would be the Terriers' getting the only goal in the first as Steven Norum found Greg Nelson back-door, and he made no mistake for his 2nd of the season to make it 1-0 Yorkton after 1 period.

The Terriers added to their lead late in the 2nd when Clay Sleeva snapped a 12 game goal-less streak by snapping home his 10th of the campaign to give the visitors a 2 goal lead.

But that advantage didn't last long as Charles-Thomas Larochelle just 53 seconds later, tapped home his 11th to cut the Terriers' lead to 2-1 after 2 periods.

In the 3rd, the Mils evened up the game just 20 seconds in as a long dump-in took a funny bounce off the end boards as Terriers' G Kael DePape came out to play it and went in front for Noah Wills who tapped in his 13th of the season.

Melville continued on the momentum from there as Louis-Frederic Theberge (pictured above) notched not one but two goals just 1:40 apart to give his team a 4-2 lead early in the 3rd.

The two teams exchanged goals a couple times back and forth to wrap up the scoring with Enrique Fontes and Wills (2nd of the night in empty net) & Maddux Nollski and Karsten Kruska scoring for the Terriers.

Alexi Giroux was solid in the Mills' crease stopping 35 of 39 shots, while Terriers' G Kael DePape made 27 saves in the loss.

The Terriers' return to action on Saturday night hosting the Estevan Bruins at 7:30PM, while the Moneymen are on the road on Sunday in Nipawin against the Hawks.  GX94 will broadcast the game with "Melville Chevrolet" Millionaires' hockey with pregame starting 5:50 and the play by play kicking off at 6:00PM.

The Swan Valley Stampeders got out to an early 1-0 lead on Carter Cockburn but then 7 unanswered goals from Waywayseecappo lead to a 7-1 Wolverines' victory.

The two teams go right back at it on Saturday at 7:00PM in Swan River.