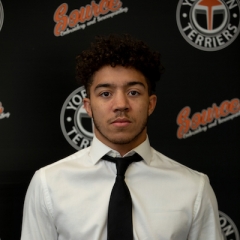 The Yorkton Terriers snapped their 3 game losing streak on Tuesday with a 3-2 overtime win over the Battlefords North Stars.

The Terriers struck first early in the 1st period as Carson Henry had a good chance stopped and then Erik Boers got the rebound & flipped it over goalie Michael Harroch for his 11th of the season to give the visitors a 1-0 lead after 20 minutes.

In the 2nd, the North Stars tied it up 10:30 in as Steven Kesslering was able to sneak it though Tresor Wotton for his 18th of the year to make it 1-1.

But just 3:33 later and off a great individual effort from Steven Norum going top-shelf on the North Stars goalie for his 10th to regain Yorkton's lead at 2-1 through 2 periods of play.

Battlefords evened it up but not til the final minute as Tynan Ewart slap-shot hit Emmet Wurst then a Terrier defender on its way into the back of the net to make it 2-2.

After a back and forth start to overtime, Kishaun Gervais (pictured above)  ended it just 2:40 in on a nice individual effort for his 16th of the season.

Tresor Wotton turned aside 33 of 35 shots for the Terriers to win his 3rd straight start, while North Stars' G Michael Harroch made 33 saves as well in the OT loss.

The Terriers' return to action on Wednesday visiting the Kindersley Klippers on GX94 with our pregame show starting at 7:20PM, and the play by play kicking off at 7:30PM.

For the 8th time this season, the Melville Millionaires fell in overtime.

The Moneymen got a point but lost 3-2 to the Weyburn Red Wings in the extra period.

Nolan Henderson scored the OT winner for Weyburn, who got singles from Ethan Whillans, Sam Skillestad and Nicolas Kovacs.

Millionaires' G Alexis Giroux made 32 stops in the loss.

Melville returns to action on Friday night for the back-end of the home and home hosting the Red Wings at the HCUC.