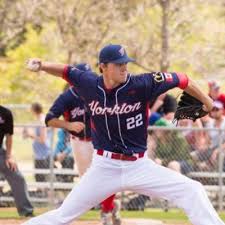 Former Yorkton Cardinal pitcher Kody Rock made a successful first step with the Milwaukee Brewers Arizona League affiliate. After starting the season in the WMBL, Rock signed a minor-league contract with the Brewers in July and made the most of his opportunity.
The Canora, Saskatchewan native, who has been playing baseball since he was four, turned his passion into a very productive college career with Mayville State in North Dakota.
Rock also enhanced his pitching skills by competing in summer baseball with Yorkton and the Mankato Moondogs of the Northwoods League.
As a senior with Mayville in 2017, Rock was 8-4 with a 3.07 record. He also pitched 91 innings striking out 96 batters. During the 2016 WMBL season in Yorkton, Rock started nine games won five and recorded 58 strikeouts in 61 innings. Those outstanding performances impressed the Milwaukee scouting staff and earned Rock a professional contract.
With the 2017 baby Brewers, Rock saw action in 12 games pitching 19.2 innings. He earned two wins and four saves while compiling a 3.66 ERA. Rock also walked three and struck out 17 batters.
Other summer league grads, Sean Wooten, Andrew Albers, Marco Gonzalez and Andrelton Simmons found their ways to the majors after playing in WMBL.
Judging from his early performance it seems Kody Rock is well on his way to adding his name to a Major League baseball roster in the not too distant future.
Posted by Benny W at 07:58