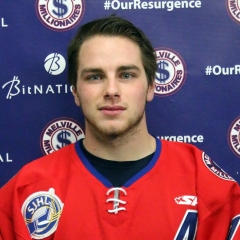 The Melville Millionaires earned their 8th win of the season on Wednesday night as they came back to beat the Humboldt Broncos 3-2 in overtime.

After the scoreless 1st period, the Broncos would get on the board half way through the middle frame as Logan Schatz would pick up a loose puck after a broken play and slide it across to Logan Hunter who would one-time home his team-leading 10th goal of the season to give the home side a 1-0 after 40 minutes.

The Mils would even things up just a dozen seconds into the 3rd period as rookie defenceman Daniel Liberty would walk across the blue-line and let one go that would find its way through goaltender Jacob Wasserman for the Edmonton product's 3rd of the year to make it 1-1. But just over 3 mins later, the Broncos would regain their lead as Mathieu Gomeric with a nice drive play would back-hand it home over the left pad of Colby Entz to make it 2-1 Broncos. The Mils would once again respond though, as Issac Embree on a 2 on 1 would elect to shoot and he would sneak it five-hole for his 6th of the season to tie it up at 2-2 and send it to overtime.

In the overtime, for the 2nd time this season Cory Schillo (pictured above) would be the hero. The Kasson, Minnesota product would sneak it through the legs of Broncos defenceman Bryce Fiske and then go top shelf on Wasserman for his 6th goal of the campaign to give the Mils the 2 points.

Churchbridge product Colby Entz made 27 saves for the Mils to earn his 6th win of the year while Jacob Wasserman made 22 saves in the losing cause.

Chantz Petruic netted his 1st SJHL Hat-Trick while Joe Marcouiller made 29 saves for his 1st SJHL win as the Yorkton Terriers snapped a 8 game losing streak slipping by the league-leading Melfort Mustangs 3-2 at the FAA.

Cody Bruchkowski also had 2 assists in the win while Head Coach/GM Mat Hehr picked up his 1st SJHL win as full-time bench boss.

The Terriers will host the Melville Millionaires in their next game on Friday night at the Farrell Agencies Arena.
(It will also be the Salvation Army Teddy Bear Toss at tonight's game and the game sponsor is GX94)


Other game in the SJHL had the Estevan Bruins shade past the La Ronge Ice Wolves 5-3.

Connor Navrot had a goal and an assists while Swan River's Josh Tripp scored in his first game as a Stamps as Swan Valley doubled up the Neepawa Natives 4-2.

Quinton Sudom and Keaton Jameson also scored for the Stamps while Brett Evans made 32 saves in the victory.

The next game for the Stampeders will be on Saturday night when they host the Portage Terriers.