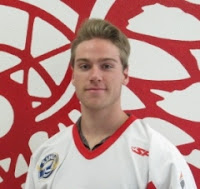 The Yorkton Terriers earned their 5th victory of the season on Wednesday night beating the Estevan Bruins 5-4 in the shootout.

In the 1st, the Bruins would get the only goal as Kaelan Holt would take a nice pass in front from Hayden Guilderson and he would make no mistake slipping it five-hole of Joe Marcouiller for his 15th of the season to give the home-side a 1-0 lead after 20 minutes. Shots 16-6 Estevan.

It was a much more eventful 2nd period as the Terriers would get the equalizer just 6:58 into the middle frame as Cody Dubas' long point shot would beat Matt Lukacs for his 1st to make it 1-1. The Terriers would grab their first lead just a short time later as Evan Nicholas would take a nice feed in front from Kaleb Bell for his 2nd of the year making it 2-1 Terriers. The Bruins would come back though with 2 goals late in the 2nd period just 1:08 apart of the sticks of Kaelan Holt and Hayden Guilderson to give the home team a 3-2 after 2 periods.

The Bruins would add to their lead just 2:09 into the 3rd as Guilderson would add his 2nd of the evening and 11th of the season giving them their first 2 goal lead of the night. But cue the Terriers comeback as first Matthew Jones (pictured above) would grab a loose puck & snap home his 1st as a Terriers and 2nd of the season making it 4-3. Then with just 3:06 remaining in regulation, Karsten McDonald would receive a nice feather pass across from Chantz Petruic and one time home his 1st SJHL goal to even it up at 4-4 and send it into overtime.

After a scoreless overtime that would see the Bruins get a power play which they couldn't convert on the game would need to be decided in the shootout.

In the shootout, Kaelan Holt would give the Bruins the early lead but then it would be Jarrid Morhart and Matthew Jones scoring the next ones to give the Terriers the extra point.

20 year old Joe Marcouiller was outstanding in the Terriers crease making 51 saves on 55 shots for his 2nd win of the season while Matt Lukacs made 25 saves in the losing cause.

The Terriers' next action will be home and home series this weekend as first up they'll visit the Humboldt Broncos on Saturday night and then return home for the return date on Sunday for a 6PM puck drop at the Farrell Agencies Arena.

The Melville Millionaires dropped a match-up with the Notre Dame Hounds for the 2nd straight night, losing 3-2 at home at the Horizon Credit Union Center.

The Mils would get out to an early 2-0 lead in the 2nd period on goals by Issac Embree and Montana Streit but the Hounds would score 3 unanswered goals, two by Tim Gould and the game winner from Connor Mylymok to give the Hounds the 2 points.

Jack Ryan made 18 saves for the Hounds to earn his 4th win of the season against the Mils while 18 year old Connor Dochuk turned aside 28 shots in the loss.

The Mils will return to the ice on Wednesday night when they host the Weyburn Red Wings.

In the Manitoba Junior Hockey League, 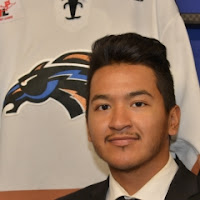 Matt Osadick scored twice while defenceman Daylin Smallchild (pictured above) chipped in with 3 assists as the Swan Valley Stampeders held on for a 4-3 win over the OCN Blizzard.

Tanner Garnham and Josh Tripp also scored for the Stamps while Brett Evans made 26 saves on 29 shots for the victory.

The Stampeders' next action will be on Friday night when they host the Portage Terriers at 7:30 from the Centennial Arena in Swan River.

The Portage Terriers hammered the Selkirk Steelers 7-1.
Posted by Benny W at 08:45