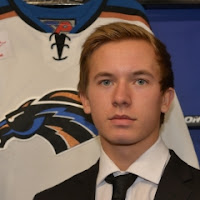 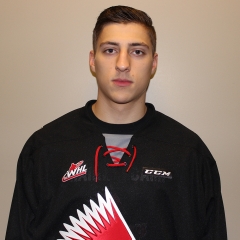 Hockey Canada and the Canadian Junior Hockey League (CJHL), with assistance from NHL Central Scouting, have decided on a list of 100 players from across the country who are invited to selection camps in advance of the 2017 World Junior A Challenge

Among those named to the Canada West selection camp roster are Swan Valley Stampeder forward Matt Osadick (pictured above left) and forward Chantz Petruic (pictured above right) of the Yorkton Terriers.

Osadick who hails from Grande Pointe, MB hads 5 goals 7 assists for 12 points in 19 games with the Stamps this season.

Meanwhile for the Moose Jaw product Petruic since being sent back by Moose Jaw (WHL) has 4 goals and 19 points in 17 games.

The Canada West Selection camp will go in Calgary Dec. 2-5 for four days of practices and games.

Team Canada West will open its tournament on Dec 10th against the Czech Republic in Truro, Nova Scotia.
Posted by Benny W at 06:51