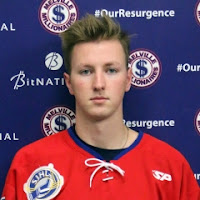 The Melville Millionaires got their 7th win of the season on Saturday night but defeating the Melfort Mustangs 5-4 in OT at the Horizon Credit Union Center.

Cole Thompson scored his 1st as a Millionaire just 1:24 into the OT on the PP while Peter Michalidies, Cory Schillo, and Montan Streit also scored for Melville.

Colby Entz earned his 5th win of the season making 41 saves on 45 shots for the Mils while Hunter Arps made 26 saves in the losing cause.

The Mils next action will be on Monday night when they visit the Weyburn Red Wings. GX94 will broadcast the game with Yorkton Dodge Junior Hockey, pregame 7:20 pxp at 7:30 from Crescent Point Place.

The Yorkton Terriers let a 2-0 lead slip away as the Humboldt Broncos scored 5 unanswered goals to beat the Terriers at the FAA,  5-2 on Saturday.

Brayden Camrud led the way for the Broncos with 2 goals, 1 assist while Layne Matechuk, Logan Schatz and Derek Patter also scored for the visitors.

Shane Sherban and Cole Keenleyside opened the scoring for the Terriers early in the 1st.

Jacob Wasserman made 32 saves for the Broncos in the win while Terrier net minder Ben Laidlaw stopped 36 shots in the loss.

The Terriers' next game will be next Sunday when they host the Battlefords North Stars from the Farrell Agencies Arena.

In the Manitoba Junior Hockey League,

The Swan Valley Stampeders began their 2 game weekend road-trip on a losing note, falling 6-3 to the Winkler Flyers.

Noah Basarab, Keaton Jameson and Trevar Mann socred for the Stamps while Brett Evans made 27 saves in the losing cause.

Matt Christian (2G 1A) and Coltyn Bates (1G 2A) led the way for the Flyers with 3 points while Brody Moffatt, Will Blake and Nolan McGuire also scored for the home team.

The Stampeders will visit the Portage Terriers at 6:30 on Sunday night to wrap up their road trip.
Posted by Benny W at 09:15