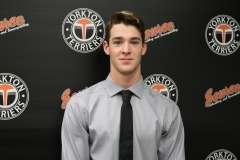 The Yorkton Terriers snapped the 13 game regulation unbeaten streak of the Melfort Mustangs on Tuesday night doubling up the Mustangs 4-2 at the Farrell Agencies Arena.

The Mustangs would grab the early lead with only goal of the 1st period as Nolan Kadachuk's long shot would produce a big rebound off of Ryan Ouellette and Ben Tkachuk would capitalize on it for his 2nd of the season to make it 1-0 for the visitors after 1 period with Melfort also leading the shot clock 14-6.

The home team would draw even at 1-1 and it would be Kurri Woodford capitalizing on a rebound of his own for his 2nd of the season just 7:11 into the middle frame. Then just 46 seconds later, Jaxon Blight (pictured above) would give the Terriers their first lead with his 1st SJHL goal as his wrister would go top-shelf over the left shoulder of Shawn Parkinson to give Yorkton a one goal lead after 40 minutes.

Shots after 2 period was 28-16 in favour of the visiting Mustangs.

In the 3rd, the Mustangs would draw even just 6:57 into the period after an outstanding stop by Ryan Ouellette on the initial shot the rebound would come out to Zach Anderson who found Colton Schell back-door for his 2nd on the PP to make it 2-2.

But just 51 seconds laterm, Terrier F Steven Norum grabbed the puck off the end boards and snuck it short-side on Parkinson for his 3rd of the campaign which would stand-up to be the game winner before Ryan Ries would ice the game with the empty netter in the final seconds.

19 year old Ryan Ouellette made 44 saves on 46 shots in his return to the Terrier crease while Shawn Parkinson made 20 stops in the losing cause.

The Terriers will head back on the road on Friday night when they visit Wilcox to take on the Notre Dame Hounds at 7:30PM from the Duncan McNeil Arena while the Mustangs are back on Friday hosting Nipawin.

The Waywayseecappo Wolverines dropped their fourth straight game on Tuesday night losing 4-3 in the shootout to the Winkler Flyers.

Dorrin Luding made 39 saves in the win for the Flyers while Wayway netminder Thomson Phinney turned aside 38 of 41 shots.

The Wolverines will wrap up their 2 game road swing on Wednesday night when they visit the Portage Terriers at Stride Place.