The Yorkton Terriers took the 6th instalment of the Highway 10 battle on Monday afternoon, after comeback 4-3 win over the Melville Millionaires on New Years Day.

The Mils for the 2nd straight game would strike first as Damian Bentz took a nice feed in front from Issac Embree and tuck home his 13th of the season to give them an early 1-0 lead. They would add to their lead at the 16:17 mark of the opening period on the powerplay as Ethan Kopyczyn's missile of a shot would beat Ben Laidlaw over the left shoulder for his 5th to give the Moneymen a 2 goal lead after 20 minutes. Shots 14-8 Mils.

The Terriers would cut their deficit in half just 50 seconds into the 2nd period as Kyle Sargeant's long wrister beat a screened Brandon Wells for his 2nd to make it 2-1. The just under 4 minutes later, the home team would even it up as Cole Keenleyside would get sprung on a breakaway and make no mistake for his 8th of the year to make it 2-2. The Mils would be able to regain their 1 goal lead at 3-2 as Tucker Chapman would bat in his 6th in the late stages of the middle frame. Shots 26-19 after 40 minutes.

The Terriers would continue to trail until the 8:54 mark of the 3rd when Cody Bruchkowski (pictured above) would across the Mils blueline and snap home his 11th of the season to make it 3-3. Then just 4:40 later, Bruchkowski would get the eventual game-winner as his initial shot was stopped then he would bang home his own rebound to give the Terriers the 4-3 victory.

Ben Laidlaw made 36 saves in the Terriers to get the victory while Brandon Wells turned aside 25 shots in the losing cause.

The Terriers next action will be this weekend for a couple games on the road in Flin Flon starting Friday night at the Whitney Forum against the Bombers.

Meantime the Millionaires will have over a week off between games with their next game being on Friday Jan. 12th when they host the Nipawin Hawks at the Horizon Credit Union Center. 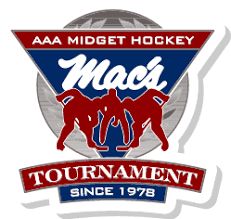 The Regina Pat Canadians captured their first ever Mac's Midget AAA Tournament title with a 4-0 win over the Red Deer Optimist Chiefs at the Saddledome.