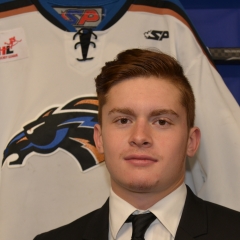 The Swan Valley Stampeders got back in the win column on Sunday with a 6-2 win over the Winnipeg Blues.

Connor Navrot (pictured above)  led the way with 1 goal and 3 assists while Matt Osadick (1G 2A) & Trevar Mann (2G 1A) had 3 points each to lead offensively.

Josh Tripp and Noah Basarab also scored for the Stamps while Ethan Peterson made 33 saves to earn the victory.

Matt LeBlanc and Levi Cudmore replied for the Blues.

The Stamps now sit 2 points back of the Neepawa for the 8th and final playoff spot in the MJHL standings.

Their next game will be on Friday night at 7:30 when they entertain the Virden Oil Capitals.

Nico Labossiere had a Hat-Trick to lead the Selkirk Steelers to a 5-2 win over the hometown Wayway Wolverines on Sunday.

Kyle Schneider and Carter Barley also scored for the Steelers while Jesse Kortyko and Drayson Skulmoski replied for the Wolverines.

The Wolverines next hit the ice on Wednesday night when they welcome the OCN Blizzard at 7:30.

Other Sunday game in the MJHL:

The Winkler Flyers slipped by the Portage Terriers 3-2.