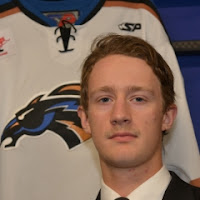 The Swan Valley Stampeders got their first win of 2018 on Sunday night defeating the OCN Blizzard 7-6 in overtime at the Centennial Arena.

The Blizzard would strike first 8:33 in as Jesse Roach would sneak one through Brett Evans for his 6th of the season on the PP to make it 1-0. The Stamps would answer back as Keaton Jameson would undress the OCN defence and then do a spin-a-rama around Emily Boily for his 15th of the season to make it 1-1. But just 2:17 later, Eamonn Miller would give the Blizzard the lead once again at 2-1 with a nice defection by Evans for his 7th of the year. The Stamps once again would respond this time it would be Trevar Mann finishing off a nice passing play for his 15th of the season making it 2-2 after 20 minutes of play.

In the 2nd it would be all OCN as they would net 3 goals in the middle frame. Brady Valiquette and Tony Apetagon would cash in with a goal each just 5:43 into the period making it 4-2. Trygve Many Guns would would make it 5-2 late in the 2nd period finishing off a nice passing play for his 7th to give the Blizzard a 3 goal lead after 2 periods.

The Stamps would come out a firing in the first as first up Mann would add his 2nd of the night and 14th of the campaign to make it 5-3. Then just 17 seconds later, Noah Basarab would capitalize on a Boily's miscue behind his own net and hammer home his 12th of the year to cut the Stamps' deficit to within one. But the Blizzard would respond as Anthony Keeper would chip in his 13th to restore the Blizzard two goal lead at 6-4. But once again the resilient Stamps would come back as Mann would notch home his 15th of the season to complete the Hat-Trick to cut the Stamps deficit to just 6-5. Then with 8:09 to go, Regina product Derek Frater would get the tying goal, his 2nd to make it 6-6 to force overtime.

After a back and forth overtime for the most part, it would finally end with 48 seconds left as Keaton Jameson's nice shot-pass would be redirected in by Quinton Sudom (pictured above), for the Fort McMurray products 5th to give the Stamps the crucial points.

Stamps' G Brett Evans made 32 saves on 38 shots for the win while Emily Boily stopped 34 shots in the losing cause.

The Stamps' kept place with the teams they are chasing as they still sit just 1 point back of Winnipeg for the final MJHL playoff spot.

Swan Valley's next game will be on Tuesday night when they visit the Dauphin Kings. GX94 will broadcast the game with Yorkton Dodge Junior Hockey, pregame 7:20 pxp at 7:30 from Credit Union Place.

Elsewhere in the MJHL.

The Wayway Wolverines got a big win on Sunday night beating the Winkler Flyers 5-1.

Preston Seymour led the Wolverines with a Hat-Trick while Darren Gisti had the other two marker. Brandon Lawson chipped in with a 4 assist night.

Wolverines netminder Issac Labelle turned aside 32 shots in the win.

The next game for the Wayway Wolverines will be on Friday night when they visit the Winnipeg Blues.

The Yorkton Terriers were on the road for a couple games at the Whitney Forum in Flin Flon.

The Terriers let a 2-0 lead slip away as they fell 8-2 to the Bombers.

Chrystopher Collin and Issac Jackson had 2 goals each to lead way for Bombers while Dino Antoniadas and Cody Bruchkowski replied for the Terriers.

The Terriers' late comeback on goals from Cody Bruchkowski and Cole Keenleyside came up a little bit short falling 3-2 to the Bombers.

The Terriers' next game will now be on Saturday night when they visit the Weyburn Red Wings.