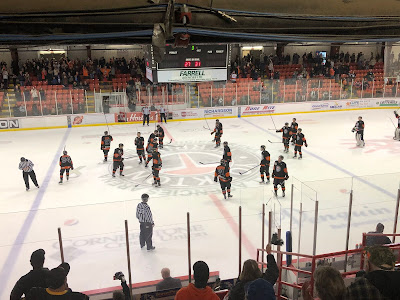 The Yorkton Terriers have won their 2nd straight in the SJHL Quarter-Final series defeating the Nipawin Hawks 3-2 in Game 3 from the Farrell Agencies Arena.

The Hawks like they did in Game 1 would strike first as Jaxsen Wiebe would beat Ryan Ouellette over the far side for his 1st of the playoffs to make it 1-0. But the Terriers would respond just 1:10 later as Colby Brandt's long shot would hit the stick of Cody Bruchkowski and get past Declan Hobbs for the Cochenour, Ontario's 2nd of the playoff to make it even at 1-1 after 20 minutes.

In the 2nd, Nipawin would regain their one goal lead as Jake Tremblay would find a loose puck and slide past Ouellette for his 3rd of the postseason to make it 2-1. But once again the Terriers would come back to even it up as on the PP, Mason Mullaney took a nice feed from Branden Klatt and walked to the high-slot and beat the Hawks netminder for his 3rd to even it up at 2-2 after 2 periods.

The Terriers would get the only marker of the 3rd at the 4:29 mark and it would stand up as the game winner as Colby Brandt made a nice inside-out move around a Hawks defender and would send it on net where Cody Bruchkowski would tap in for his 2nd of the postseason to give the Terriers the home ice victory.

Terriers G Ryan Ouellette turned aside 29 of 31 shots to earn his 4th playoff win while his counterpart in veteran Declan Hobbs made 24 stops in the loss.

The two teams will go right back at it in Game 4 on Wednesday night from the FAA. GX94 will broadcast the game with Yorkton Dodge Junior Hockey, "Sask Milk" pregame show begins at 7:20 with the PXP starting at 7:30.

If you want to get your tickets for Game 4, you can do so by clicking HERE