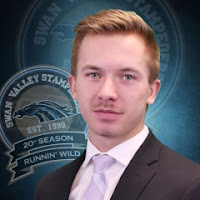 The Swan Valley Stampeders earned their 3rd consecutive victory on Wednesday night, defeating the Dauphin Kings 5-3 at the Centennial Arena to take a 3-0 series their MJHL Quarter-Final matchup.

The Stamps like they did in Game 2 would strike first in Game 3 as it would be Brian Harris picking up his 1st of the playoffs just 66 seconds in the 1st to make it a 1-0 lead. They would make it 2-0, 1:45 later as Brad Goethals would beat Bryan Landsberger for his 2nd of the postseason to give the home team a two goal lead very early on.  Dauphin would respond just a short-time later on a 5 on 3 PP as Riley Shamray would one-time home one past Merek Pipes to make it 2-1.  The two teams would then exchange PP goals, 2:37 apart on markers from Campbell Balk (SV) and Cole DeKonick (DAU) that put the score at 3-2 Stampeders after 20 minutes. Shots were 22-9 Swan Valley.

MJHL MVP Josh Tripp would help Swan regain their two goal lead as Josh Tripp would take nifty feed in front from Quintin Sudom and he would use good patience to tuck in his 3rd of the series to make it 4-2 just 3:40 into the 2nd. The Kings would once again cut their deficit in half when Matt Boonstra was driving to the Stamps net and the refs would talk about it and would call it a goal as the game sat at 4-3. But before the middle frame would conclude, the Stamps would once again make it a two goal hockey game at 5-3 after a highlight reel goal from Maine Black Bear commit Matt Osadick (pictured above) as he tucked in the back of the net with a nice back-hand by the Kings net minder.

Merek Pipes earned his 3rd straight win between the pipes making 23 saves while Kings' netminder Bryan Landsberger in his 1st career playoff start turned aside 41 shots in the loss.

The Stamps will go for the 4 game sweep on their series on Friday night when the two teams meet in Game 4 of their series from Credit Union Place in Dauphin. GX94 will broadcast the game with Yorkton Dodge Junior Hockey, pregame show begins at 7:20 with PXP kicking off at 7:30PM MB time.

The Waywayseecappo Wolverines dropped their 3rd straight in the postseason losing 8-5 to the Portage Terriers.