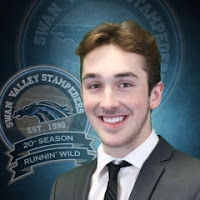 The Swan Valley Stampeders wrapped up their regular season on a high note on Sunday night with a 3-2 victory over the Winnipeg Blues to finish of the season with 42 victories.

Alex Uryga (15) and Brian Harris (16) opened up the scoring for the Stamps to help them to a 2-0 lead before Braden Binda replied with a PP goal for the Blues to make it 2-1 Swan after 20 minutes.

In the 2nd, Winnipeg would even things up as Ty Naaykens would defect home his 15th of the season just 39 seconds into the middle frame to make it a 2-2 game and thats where would sit after 2 periods of play.

The Stamps would get the eventual game winner just 36 seconds into the 3rd period as Lane Kirk's point shot would sneak by Jeremy Link and then Swan River's Carter Cockburn would tap it home for his 6th of the season to give his team the two points.

St. Albert's Michael Davis (Pictured above) got the start for Swan and turned aside 39 of 41 shots to earn his 18th victory over the season in goal while MJHL Goalie of the Year Jeremy Link made 38 stops in the loss.

The Stamps will now prepare for their MJHL Quarter-Final against the Dauphin Kings that begins on Friday night with puck drop at 7:30 for Game 1. Meanwhile for the Winnipeg Blues they will finish 6th overall in the standings and that sets them up for a date with the Steinbach Pistons in the MJHL Quarter-Finals.

The Waywayseecappo Wolverines also finished their 2018/19 season on a winning note after a 6-4 win over the Virden Oil Capitals.