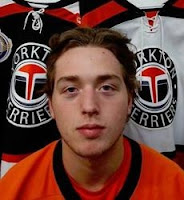 The Terriers would strike first in the 1st as Jared Legien (pictured above) would take a nifty feed in front from Kishaun Gervais and go top shelf over the right shoulder of Patrick Pugilese for his 1st of the playoffs to make it 1-0. They would make it a two goal game just over 4 minutes later as Chantz Petruic's long wrist shot would beat Pugilese over the right pad for his 4th to give the Terriers an early 2 goal lead. Colton Gerlib would net a late PP goal for the Hawks to make it a one goal lead after 1 period.

Legien would add his 2nd of the night as he ripped it through the Hawks goaltender to make it 3-1. But just 13 seconds later, Michael Makarenko would make it a one goal game once again as he would finish off a nice passing play from Jake Tremblay to make it 3-2. The Terriers with another response though as Colby Brandt would find Chantz Petruic and he hammered home his 5th of the postseason to make it 4-2 after 40 minutes.

It would stay like that until the later stages of the 3rd as Logan Moon would capitalize on a Terriers turnover and go top-shelf on Ryan Ouellette for his 1st SJHL Playoff goal to make it 4-3 but thats as close as they would get.

Ryan Ouellette earned his 6th victory over the postseason making 37 saves on 40 shots.

In the other SJHL Semi-Final, it'll be the Melfort Mustangs taking on the Estevan Bruins.


In the other Tuesday Game 7's,