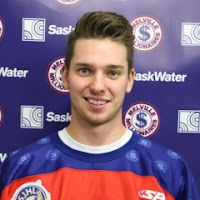 The Melville Millionaires snapped their 10 game losing streak in convincing fashion on Friday hammering the Yorkton Terriers 6-2 at the Farrell Agencies Arena.

The Mils would score 4 unanswered goals from Aidan Steinke (10th), James Philpott (1st SJ goal), Josh Borynec (17th) and Max McPeak (7th) to give the visitors a 4-0 lead late in the 2nd.

Kishaun Gervais would respond with a PP goal for the Terriers to get them on the board but Borynec would add his 2nd of the period with 30 seconds to help the Mils to a 5-1 lead after 40 minutes.

The Terriers would make it a three goal game just 30 seconds into the 3rd as Mason Mullaney would snipe home a short-handed marker just half a minute into the period to make it a 5-2 game. Mils forward though Mike Wong would regain the Mils four goal lead once again, with his 2nd to lead them to the road win.

Colby Entz (pictured above) , on his 21st birthday turned aside 38 of 40 shots to earn his 12th victory of the season while Andrew Henderson started as was relieved after giving up 5 goals on 24 shots in the first two periods. Ryan Ouellette came on in relief and stopped 16 of 17 shots in the Terrier goal.

The two teams will wrap up their season series on Saturday night at the Horizon Credit Union Center with puck drop happening at 7:30.

The Swan Valley Stampeders captured their 41st victory over the season doubling up the Neepawa Natives 4-2 at the Yellowhead Center.

Josh Tripp, Tucker Scantlebury, Josh Maucieri and Carter Cockburn scored for the Stamps while Michael Davis made 24 saves to improve his record to 17-3 on the season.

The Stampeders who will face the Dauphin Kings in their Quarter-Final series next weekend, will complete their regular season schedule on Sunday night when they entertain the Winnipeg Blues. GX94 will broadcast the game with Yorkton Dodge Junior Hockey, pregame begins at 6:20 pxp kicks off at 6:30.