Stampeders; Terriers strike first in their respective series on Friday 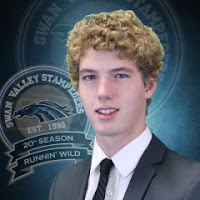 The Swan Valley Stampeders used a big 2nd period to strike first in the MJHL Quarter-Finals, defeating the Dauphin Kings 6-3 at the Centennial Arena.

The visitors would strike first just 4:11 into the 1st on the powerplay as Brendan Arnold would bang it home to make it 1-0. Then 9 minutes later, Grady Hobbs would sneak it through the Merek Pipes to give Dauphin a 2-0 advantage after 20 minutes. Shots were 17-11 Kings through 1 period.

The Stamps's offence would wake up in the 2nd as it would begin with MJHL MVP Josh Tripp who make a nice move around the Kings' D then from back-side back hand home his 1st of the playoffs to cut the deficit to 2-1. Then just 6 seconds later, Alex Uryga would split the defence and his snap-shot would beat Ethan Slobodzian to tie it up at 2-2. Tucker Scantlebury would deflect home a Quintin Sudom point shot past the Kings' net minder to give Swan their first lead at 3-2 lead just 11 seconds.  Swan Valley would add two more from Kasyn Kruse and Tanner Glasrud (1st as a Stamp) to make it 5-2 for the home team after 40 minutes.

In the 3rd the Stamps would add to their lead at the 15:04 mark as Tucker Scantlebury would snipe in his 2nd of the night to make it 6-2 but just 22 seconds later, Cole DeKonick would respond with his 1st to wrap up the scoring.

The Stamps now lead the Best of 7 MJHL Quarter-Finals, 1-0 with Game number 2 set for this Sunday at 7:30 in Dauphin. 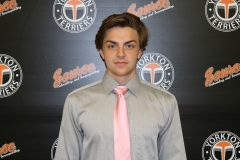 Ryan Ouellette (pictured above) made 35 stop for 1st SJHL Playoff win to help the Yorkton Terriers win Game 1 of their Best of 3 survivor series, 4-2 over the Notre Dame Hounds.

Branden Klatt, Chantz Petruic, Colby Brandt and Dino Antoniadis scored for the Terriers while Charles Martin and Kyle Robinson replied for the Hounds.

The Terriers will look for the sweep on Sunday night when they travel to Wilcox. GX94 will broadcast the game with Yorkton Dodge Junior Playoff hockey, pregame begins at 6:50PM with PXP kicking off at 7PM.