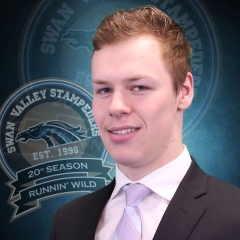 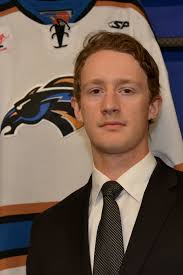 For the second consecutive month, Bradly Goethals (pictured above left) of the Swan Valley Stampeders has been named the RBC Player of the Month, MJHL Commissioner Kim Davis announced today.
Goethals, 20, showed off his offensive talents, reflected in 18 points (8-10) in nine games. The native of Ile des Chenes had five multi-point games over that span, highlighted by a five-point game.
The 6-foot-1, 180-pound Goethals is one of many outstanding players on the Stamps, who sit second in the MJHL with 24 wins.
The runners up are 20 year old forward Nathan Halvorsen of the Selkirk Steelers and 20 year old forward Tony Apetagon of the OCN Blizzard.

The Telus Defenceman of the Month for December is Quintin Sudom (pictures above right) of the Swan Valley Stampeders.
Sudom, 20, is excellent in both ends of the ice, looked upon to shut down opposition attackers and also provide offense, reflected in 11 points (3-8) in nine games last month. The native of Fort McMurray was a runner-up for this award last month. At 6-foot-2, 200-pounds he has a big presence while on the ice.
The runners up are 20 year old Troy Williams of the Steinbach Pistons and 18 year old Lane Taylor of the Portage Terriers.
(MJHL Press Release)
Posted by Benny W at 17:24