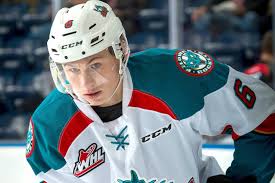 Yorkton's Kaedan Korczak's not quite sure when his name may be called come this June's NHL Entry Draft, but that's some thing he isn't trying to think about quite yet.

The former Yorkton Mauler and Yorkton Minor Hockey Alumni is currently in his 2nd season with the WHL's Kelowna Rockets and for some players playing during their Draft eligible year there can be some added pressure but that's some thing Korczak doesn't try to ponder a whole lot.

"I try not to think about to a whole lot, sometimes it comes to mind but I try to not get myself too distracted and I just try and worry about how I'm playing on the ice and how I am working hard off of it and try to focus on my game", Korczak said in a phone interview from Kelowna.

Being a draft eligible player makes for a much busier time during the season with some more exposure opportunities and Korczak along with 39 other CHL players got a chance to showcase their talents last week during the Top Prospects Game that was held on Jan. 23rd in Red Deer, and for Korczak whose Team Orr beat Team Cherry 5-4 in the game, he says it was a great experience.

"It was super fun, we were only there for a couple days, it was cool to meet all the other guys from the different leagues and the game obviously was really fun and cool to be a part of."

Korczak is currently ranked 31st among North American skaters in the latest mid-term NHL Central Scouting rankings for the 2019 NHL Draft which is set for June 21st and 22nd in Vancouver.

But for Kaedan during the 2018/19  season there was one game in particular on December 14th against the Calgary Hitmen that stood out as he went up against his little brother for the very first time.

"That was pretty cool, it was the first time we played against each other in a hockey game and we had lots of family and friends in attendance & it was a cool experience for everyone."

Korczak currently has 19 points in 49 games this season and his Kelowna Rockets, who are currently fighting for a Western Conference playoff spot will return to action on Friday night when they visit the Spokane Chiefs


Audio with Korczak below: