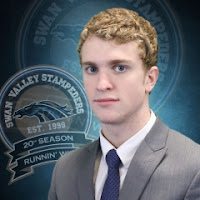 Merek Pipes (Pictured above) was sensational in between the pipes for Swan Valley as the Stampeders blanked the 1st place Portage Terriers 2-0 on Saturday night at Stride Place.

The Cobble Hill, BC product made 42 saves to earn his 3rd shutout of the season while Campbell Balk & Josh Tripp scored for Swan who earned their 28th victory of the season.

The Stamps are now 9 points back of Portage for top spot in the MJHL standings, and they'll return to the ice on Tuesday night when they visit the OCN Blizzard.

Nico Labossiere scored twice while Matt Lenz made 30 saves to lead the Steinbach Pistons to a 4-1 win over the Waywayseecappo Wolverines 4-1.

Troy Beauchemin and Tanner Mole also scored for the Pistons while Bryce Krauter had the only marker for the Wolverines.

The Wolverines/Pistons will meet once again on Sunday at the Wayway Arena Complex. Game time is at 6PM.

The Flin Flon Bombers used a 3 goal first period to lead them to a 5-3 victory over the Yorkton Terriers on Saturday night.

Gabriel Waked turned aside 28 shots in the win while Terriers net minder Ryan Ouellette made 33 saves in the loss.

The Bombers will wrap up their weekend road trip this afternoon (Sun) in Melville against the Millionaires at 4PM. The Terriers' next game will be on Tuesday night when they entertain the Melfort Mustangs at 7:30.